Spending an hour with Silverback Gorillas has been one of the most wild and thrilling animal encounters I have ever had. It ranks right up there with my up-close-and-personal moment with Borneo pygmy elephants, standing next to a baby moose while hiking in Newfoundland,  having monkeys climbing all over me in Bolivia, and listening to a lion scratch his back on our car in Tanzania. Still, this was different.

I had never imagined myself seeing gorillas in the wild. It certainly wasn’t a plan on this trip but then again, most of my trips are somewhat spontaneous. I was already on a safari in Tanzania taking pictures of Zebras, lions, and rhinos but knowing that Uganda (just one country over) is one of the only places in the world to see endangered mountain gorillas, I had to make it work.

Fast forward past a 28-hour bus ride from hell and we were in Kampala, Uganda. Our hotel had a gorgeous view of the city where we got to see the sun rise over the smoggy city. Since a gorilla hiking trip is difficult to plan alone, I emailed Gorilla Tours and they helped us get organized, transport us to the park, find us accommodation and basically make it all happen. After our whirlwind of an experience in Tanzania (post coming soon), we wanted to go with a reputable company and no company in Uganda has a better reputation than Gorilla Tours. 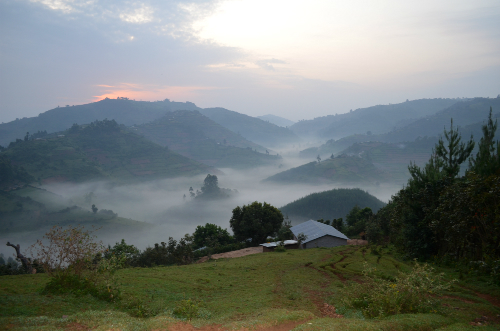 They booked us in for two nights at the Gorilla Valley Lodge, which is nestled right next to the UNESCO World Heritage Site of Bwindi National Park. Being able to wake up to the sounds of nature and opening up the door to a misty jungle added to the experience. I wish I could have stayed for months.

After a hearty breakfast, we jumped in the 4×4 and made our way to the park entrance. Once there, we were met by our guides who would walk us through the jungle, find the gorillas, and try to keep us safe. These guys have an interesting life. Each day they hike into the jungle to find the families of gorillas. There are almost a dozen different families and they are always moving. Some of the families are completely wild and have never had human contact, some of the families are only for scientific study, and some of them have been “humanized” by guides who keep in contact with the gorillas for two years before bringing visitors along with them. I was now one of those visitors. 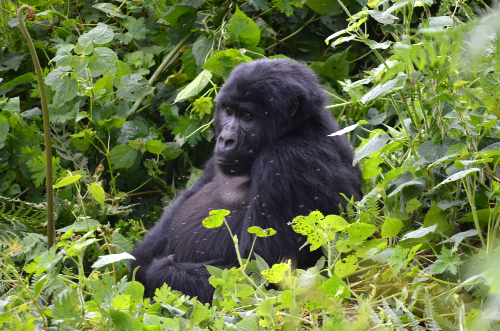 The first hour of the hike is alongside small villages. After all, there isn’t much wilderness left in Uganda, considering it’s one of the most densely populated countries in the world. We then trekked past luscious green flora and fauna and stumbled down paths full of angry ants. Karla, my wife, got stung by a black wasp when the wind landed it on her shirt. They sting anything in their path. Next, our guides brought us through the thick jungle. The machete came out and began to cut down the thick bush. It felt like we were in Jurassic Park. This is a primary rainforest after all and it’s so thick, we could barely see the guides in front of us. I always imagined that a gorilla would be easy to spot but that thought was quickly put to rest as I glanced through a neighbouring bush and caught a gorilla off guard. I wasn’t expecting to see a gorilla and the sudden fright pushed adrenaline through my veins.

From that moment on, we had found the biggest family of them all and we’re able to spend an hour with about 16 gorillas. There were three silverbacks walking around, a bunch of teenagers, and even some cute little fluffy babies who stayed in the trees playing with each other. One of the teenagers just sat in the bush, surrounded by flies, staring as if he was in a meditation. Eventually, he was done with us looking at him and walked off. The silverbacks were quite shy, which I found strange for such an enormous animal. They would usually ignore us and turn their back to us while eating the leaves. At one point, we spooked one of them who had been behind us in a bush. Frightened, he quickly ripped down the bush and stormed by us giving us the angry eye and showing us his strength. It was exhilarating but I’m thankful that he didn’t attack. One of the most amusing parts of the trip was watching the gorillas roll down the hills. We would be standing on the side of a hill and suddenly a crackling sound would be going by. I’d glance to my right and see gorillas rolling head over toes down the hill instead of walking. Looks like they were having a great time! 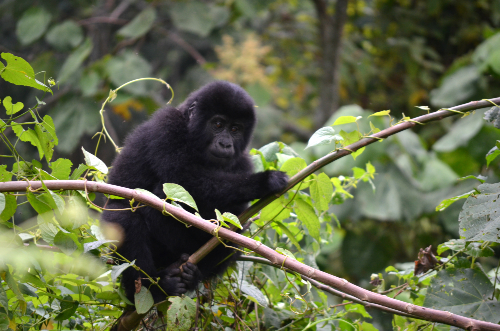 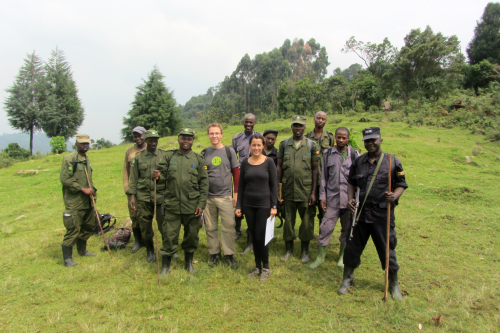 Eventually, it began to rain, which is to be expected in a rainforest. Unfortunately, the gorillas don’t like to get wet and they went hiding into their little dens beneath the bushes. We stayed anyways and enjoyed our last 20 minutes before it was time to leave. This is the part I dislike the most about adventures. I never want them to end. If only I could chill with the gorillas for the whole day. Maybe I could become gorilla man and join their family for a few years. I could learn how to pound on my chest and let out roars like Tarzan. Then again, I’m sure they want their privacy and my hairless body just wouldn’t blend in. Being able to experience these magnificent creatures in their natural habitat made it harder to imagine the difficulty they face going forward. There are only around 700 gorillas left in the world, divided between the countries of Uganda, Rwanda, and the Democratic Republic of the Congo. Between war, loss of habitat, and diseases brought from humans, they really have a hard time ahead.

We packed up the cameras, zipped up our rain jackets, and made our way back through the forest and into civilization – only this time I wasn’t sure if I wanted to be part of it anymore.

Want to make this trip happen?

The most important part is making your way to Uganda. It’s a very small and friendly country where you can experience unique African culture, raft class-5 rapids on the nile, and experience amazing wildlife. We travel hacked our way to Africa, flying in business class for less $800.

Trekking to see the mountain gorillas is not cheap. In fact, it’s the most expensive activity I have ever done. The permits alone are $600 USD each, which allows you to spend just one hour with them. You’ll then need to factor in transportation and accommodation, which is best booked by using a company like Gorilla Tours.

If trekking to see silverback gorillas is a dream of yours or if you have been, please leave a comment below!

If you’re from Canada, Canadian Free Flyers is the premier travel hacking club that will help make your dream trip a reality.