It was midnight and while most people were going to bed, my wife and I were waking up to begin our adventure to Kawah Ljen volcano in East Java, Indonesia. Before going to bed for less than one hour, we bought some rice and egg to eat on the drive. Our guide picked us up in a jeep and away we went.

Once we arrived at the base, the hike began. My wife and I ended up on our own because the other couple and guide were far too slow for our pace. It was still pitch black outside but we had to make it to the top before sunrise so that we could see the blue flames we had heard about. It turns out that Kawah Ljen has an active sulphur pit, which exudes blue flames 24/7 but are only visible at night. Sounded amazing to me, hence the reason for waking up so early. 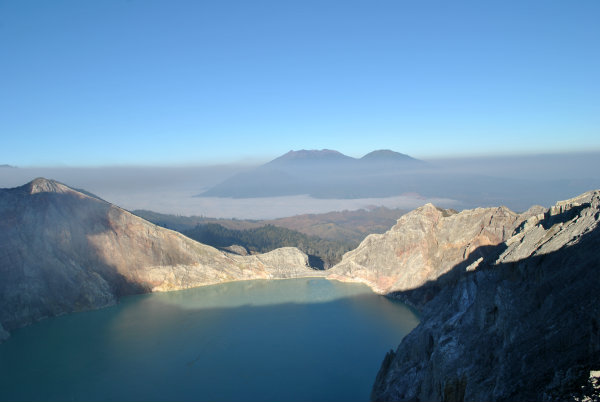 After about an hour or two, we reached the top of the Volcano. We couldn’t really see anything around us, although we could see the silhouette of another volcano in the distance. The moon was hanging overhead. A beautiful morning if I do say so myself. As we stumbled around, looking for the best vantage point to see the blue flames, a worker called us over. Workers you say? Yes, there are actually people who work at the volcano, gathering sulphur amidst the toxic fumes, carrying 80 KG on their back twice per day up and down the volcano. They earn less than $10.

He couldn’t speak english but he invited us over with hand gestures. We followed and he ended up bringing us right down to the pit. I don’t have asthma but the fumes were making me wheeze. I found it hard to breath. I poured some water on the blanket we had brought with us and held it over my mouth. My eyes were watering as if I was cutting an onion. I held on. 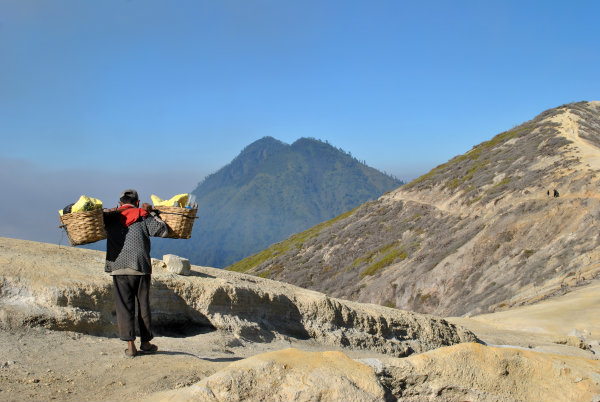 We were now standing right beside the blue flames and the pit of the volcano. It was pure insanity but I figured if these workers do it twice per day, we can do it once. He let us hold fresh sulphur, which was bright yellow like a bumblebees back. The sound of the flames got louder. Eventually, we gave him a tip and climbed our way back up to the top. When we reached the top again, there were a couple more people and the sun was beginning to light up the sky. This is when we noticed the “Do Not Enter” sign. I guess visitors are not allowed down to the bottom due to extreme danger. Guess we were lucky. 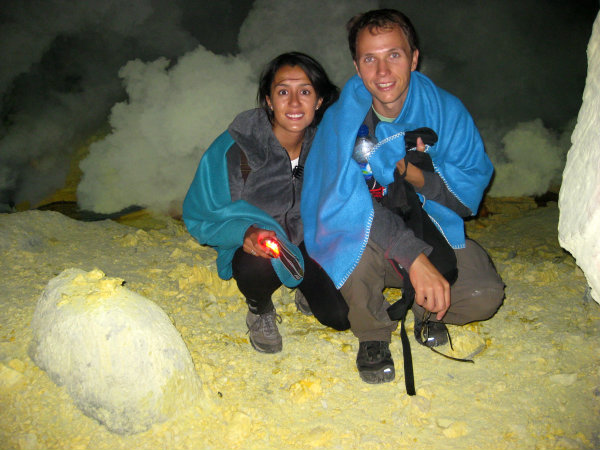 The fumes, now carried by the wind, came directly into our faces once again. My eyes watered and I couldn’t see. I tried opening my eyes slightly to see the path and walk out of the chaos. Eventually, the wind died down and the fumes weren’t as strong. We walked around the rim of the crater, marvelling at the magnificent views all around us. It was like staring out the window of an airplane. Misty clouds drifted low in the distance, making it seem as though the crater lake was floating. Smoke billowed out from the gaping hole at the pit of the volcano. The colors were peaceful. The lake matched the sky.

We stayed for a long time, soaking in all the majesty that was before us. After taking a good 300 photos, we knew we had to start hiking down. After all, we had to jump in a car for a 9-hour drive to see yet another beautiful volcano of Indonesia. Mount Bromo. 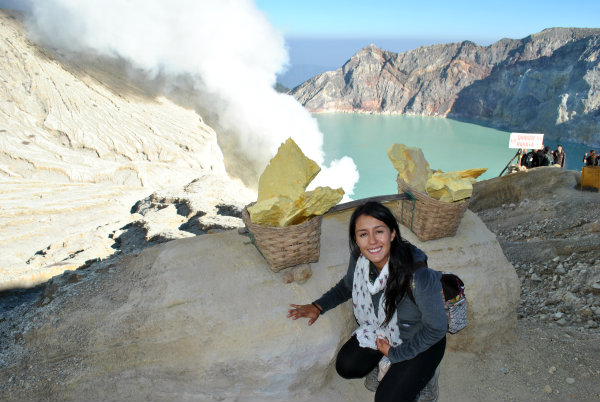 How to visit Kawah Ljen

It’s quite easy. It’s located on the far east side of Java, Indonesia. It’s easily accessible by ferry from Bali. If you’re coming from Bali, it’s literally nearby the town where they ferry arrives. The town is called Banyuwangi. When we arrived, we simply found the cheapest place we could find (about $10/night but not that nice) and then asked around for prices to go see Kawah Ljen. You’ll need a driver with a 4×4 to make it up the mountain. Ask around for prices. If you want, you can also continue on to Mount Bromo (middle of Java) after this visit. Here is a link to the wiki page for Banyuwangi so you can check out the hotels.

How awesome does this place look?